When we talk about specializing in prototypes here at RE3DTECH, we’re mostly referring to our ability to 3D print a functioning sample version of a final product.

In many cases, we help customers iterate during the initial stages of product development so they can finalize their design for mass production via injection molding.

But as useful as industrial 3D printing is for Prototype injection purposes, sometimes it’s impossible to 3D print a prototype comparable to the final injection molded product. And without a comparable prototype, it’s also impossible to conduct the right tests.

That’s why in addition to 3D printing actual prototypes, we work with customers to 3D print the tooling they need for injection molded prototypes. 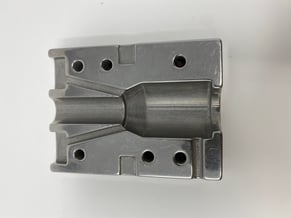 “Prototype injection molding” is a term you typically don’t hear often in the manufacturing world.

Injection molding, which consists of injecting plastic material into a mold where it cools and hardens, is the manufacturing method of choice for mass production. It’s capable of producing complex parts at scale with a high level of accuracy and consistency.

But the tooling required for this process is so expensive and time-consuming to make that it isn’t recommended for lower volume production quantities—let alone prototypes. . . until now!

At RE3DTECH, we can 3D print tooling for injection molded prototypes quickly and cost-effectively.

Instead of using tool steel, we use thermal sets, which are resins that won’t return to a liquid state once they’ve hardened. This specific property allows us to inject thermoplastics with high melting points that won’t immediately compromise the integrity of the tooling.

You certainly won’t get the same lifecycle you would from tool steel, because the thermal sets typically degrade over 100-200 cycles. But if you only need prototype quantities, 3D printed tooling is more than sufficient.

Because 3D printing is a relatively new process that is still evolving, there are some materials that aren’t yet compatible with this technology. If, for example, you plan to make your final product using PA6, there’s no comparable 3D printing material available.

That means in order to conduct accurate prototype testing, you need to use the exact material—which is only compatible with injection molding.

In this case, 3D printing the tooling for injection molding gives you the opportunity to test your prototype as an injection molded part. And since the 3D printed tooling is easy and inexpensive to make, you have the option to iterate and test different designs before moving on to mass production.

Could your product benefit from injection molded prototyping? RE3DTECH can make it happen with our unparalleled 3D printing services.